I was working on what appeared to be a fairly complex rule base based on EMF. The rules aren’t operating over a huge number of facts (less than 10,000 EObjects) and there aren’t too many rules (less than 300), but I was having a problem with running out of Java heap space (set at ~400 MB).

A sample rule would look like the first rule in this package.

From these techniques I thought of four options.

Here, I would simply combine all of the rules into one file, as in this revision. The idea behind this, is that perhaps the Drools engine could not optimise the network correctly because the rules were all in different files. This turned out to be untrue.

handler.veto(object) was defined as follows:

I could remove this from the rules, as in this revision, as follows:

I found out that removing this from the rules did not make a significant difference either in time or in memory. This is probably because my test models had very few model elements where overridden was actually true; thus, this restriction was not actually making any difference.

This was a much better approach. Here, connectSet(object, a, b) was essentially implemented as:

I could merge this directly, as in this revision, into the rule:

This made a huge difference in both execution time and memory usage.

Similar to connectsSet, this rule allowed me to select bidirectional edges. The function was written as:

This could be rewritten, as in this revision, as:

I found this didn’t make as much of an effect as connectsSet. I think this is because connectsSet is unidirectional so the selects can be applied very effectively, whereas connects is essentially rewritten as an eval() condition (since it uses && and || conditionals directly).

To compare, I made some graphs. These metrics are not very reliable, as each test was only executed once, and garbage collection was not completely accounted for; however, I think it represents a realistic collection of data for comparison purposes. The first graph compares the execution time for inferring two different models. 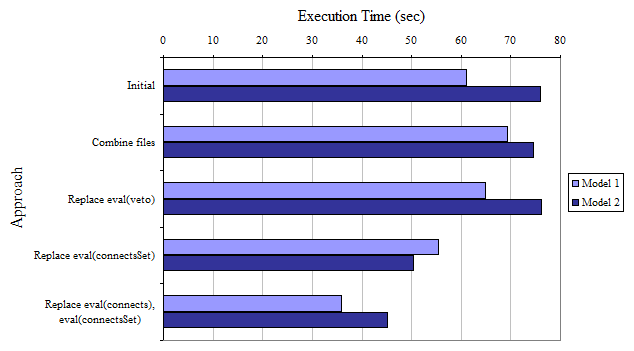 The second compares the allocated heap usage. The idea behind this is that the JVM will not allocate more heap space until it is actually necessary, but it does not reclaim allocated heap, so the maximum memory usage is definitely lower than the final allocated heap. 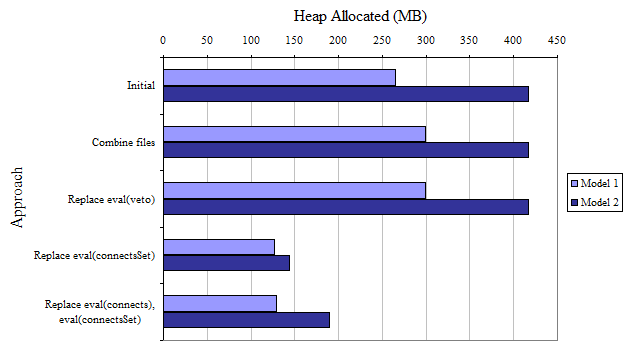 The final compares the final heap usage; that is, the amount of heap used once the inference has complete. This measure is much less reliable than the allocated heap usage, as this value is affected by garbage collection. 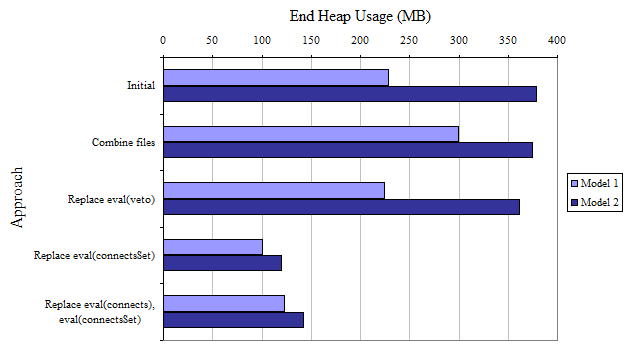 In the future these tests should be rewritten to actually keep track of the memory size over time, and the tests should execute multiple times over a wider range of models (i.e. more than two).